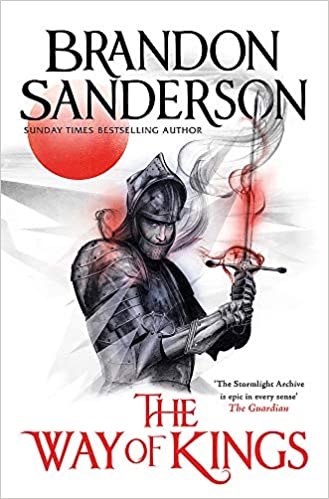 The Way of Kings is epic in more than one way. I have great respect for Brandon Sanderson, he first came to my attention as the author chosen to complete Robert Jordan’s Wheel of Time, something that he did with great aplomb. Following that I sampled his Mistborn trilogy and enjoyed his unique take on fantasy and his characters, even if certain aspects were a little too simplistic in terms of story telling.

Now when I saw epic for Way of Kings I mean it. The book is really two books and together provide a formidable read. It was understandable why the book was packaged as one, there really wasn’t any half way point to make a clean break. It is also epic in scope. Brandon’s world building is immense and he has conjured a very alien world in which his characters inhabit. Some of his descriptions are a little lacking but over time an understanding of how and what spren are becomes apparent and how shard blades work.

The book really focuses on three protagonists, two military and one academic although only the two military ones get full coverage in the novel. Kaladin is a likeable and suitably heroic hero although his inward gazing and self doubt did grate a little. My favourite character was Dalinar and Brandon does a great job of portraying a leader who is world weary and strives to do the right thing.

I have to say that although I did enjoy the book it was a bit of a slog. The characters evolve slowly and many authors would have accomplished a similar story in half the space however there is something enigmatic about the prose that keeps you from skipping ahead and everything builds to a crescendo at the end that despite hours and hours of reading leaves you wanting to get the next book in the series and keep on reading.

I may take a break for a moment but I will definitely be returning to this intriguing world as soon as I am able, I really want to know what happens next and find some answers to the many questions posed in this first volume.