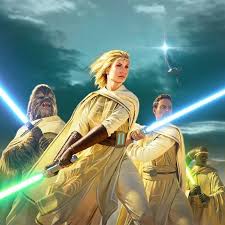 The Light of the Jedi is the first in an exciting new series set in a new tie period of the Star Wars Universe. The High Republic is set after the Old Republic but before the Skywalker saga.

This is a time when the Jedi are at the height of their power and influence and truer perhaps to the ideals of the force than the Jedi we see in the prequel trilogy.

This is a bold new direction for Star Wars, separating itself off from the heroes we know and love. Although this has been done in computer games and MMOs this is a book based launch. We do get some familiar character Yoda is just a master in this time and we get to see Oppo Ranciss and Yareal Poof, two under used and often ridiculed Jedi council members from the Phantom Menace.

This first book is very much a stage setter. We get to understand the Jedi’s relationship to the republic and the wider geopolitics. It is a time of peace. The Sith are mentioned but they seem inconsequential at this time. The real opponents are the Nihil.

The Nihil are a pirate organisation on steroids with a distinctive culture and ideology. They have an interesting structure and embrace as many races as the Jedi do. In many ways the Nihils focus on the self and taking what they want is the antithesis of the Jedi.

The book is framed by a disaster in hyperspace that results in a massive rescue operation and an investigation in to the cause. We not only see the story through the eyes of several fascinating Jedi, masters, knights and padawans but also the Chancellor of the Republic and its citizens.

Jumping back 200 years has given the writers a new playground to play in and Charles Soulle does much to lay the groundwork. Soulle is one of the better writer for of the new generation of Star Wars writers. I am usually very critical of modern Star Wars novels but this does feel much more Legendsy.

I did find the plot dragged a little in the middle and there were a lot of characters to get to know but the premise if interesting and the puzzles and questions raised more than enough to hold a series.

What is most refreshing is the portrayal of the Jedi themselves. We see a more nuanced and comfortable Jedi in the book. They understand themselves, the force and their place in the galaxy but also have a willingness to learn. It will be fascinating to see how we go from this to the more insular, rigid and easily manipulated Jedi we see in the Skywalker Saga.

As a first book Soule has some heavy lifting to do and as such I think some of the character development was underdone but this will change as subsequent books flesh out this new environment.

Whilst not up to Timothy Zahn level of prose ad story this is a most worthy second place and holds great potential I look forward to learning more about this more grown up galaxy.