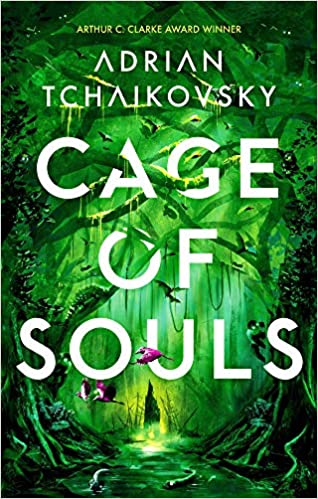 Cage of Souls is an interesting book many of Adrian’s are. He has a way with storytelling, a way of weaving a narrative from the simple into something greater. His ability as an author was show to me in the way in which he got me, an acknowledge arachnophobe, to care about a civilisation of space faring spiders.

This latest book was in some ways a little messy, its lead character whilst engaging was a little under-developed to start off with. The character has a unique ability which felt somewhat under explained in the greater themes of the story.

The story is told in a series of parts and is non-linear in fashion as our protagonist relates his story for future generations. The narrative jumps from the present to the past to explain his life. The lead character is very much a bystander of events and acts as a guide to this very strange world.

Set in the far future the remnants of humanity now all live in a single magnificent city. A decadent place with quite literally a squalid underclass. The denizens of this city appear human but many of them are mutated forms of such and I fact the narrator’s adventures in the underworld is very reminiscent of the strange mutant world Leela’s parents live in in Futurama.

Much of the story takes place on a brutal floating prison where political prisoners from the city are exiled. The hero builds up a kind of alliance with inmates, wardens and scientific experiments and tries to survive.

Where this book comes into its own is in the later half as Adrian draws us to realize the corruption and uselessness of the city, Shadrapur. We come to see that humanity is not thriving but merely marking time and from then on, we get to see the collapse of this last bastion of human life and possibly the end of all human life on earth.

One could read this as a comment on environmental politics, on the evil man can do against man but one can also treat it as an interesting treatise on human nature and a curious and twisting story.