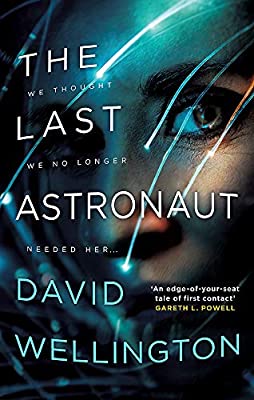 The Last Astronaut is a fairly run of the mill first contact science fiction story occasionally elevated by some novel ideas. The setting is the near future and our lead is a failed Mars Astronaut who is struggling with her past role as Mission Commander and her need to redeem herself.

Character interaction is played with greater importance than say technological features and the novel succeed with a very small cast of characters. There is the standard mission ops Earthbound mentor, the hard nosed military officer and the science nerds, an engineer and a biologist.

The story focuses on one particular mission but there are other elements in the plot in particular is the prescient use of commercial companies exploring space and their place along side NASA and the other space agencies.

Much of the early stages of the book and the early interactions with the alien/s is very like Ben Bova’s early works although the prose didn’t engage me as much. Once on the artifact the pace of the story picks up,

What rises this book up is the unique approach that Wellington has taken to his alien. It truly feels alien and yet still relatable and understandable. There is somewhat of a gimmick in terms of communication but this was the only sensible way in which any resolution could be had despite its quasi -trope like form.

Wellingtons grasp of biology and understanding of analogous physiology is well grounded and makes the interactions with the alien all the more deep. His description of the interior of 2I was creepy and unsettling in a kind of body shock way and really evoked some visceral feelings in me.

The characters were fairly standard and not overly developed, the army man was aggressive and militaristic and the scientists were nerdy. Such stereotypes are not necessarily a problem but the more sci-fi you read the more you start to look for greater nuance. The lead is sympathetic throughout and she fits the hero mould well. All in all the novel works on the level at which it is pitched. This is not a sprawling space opera nor a work of great sci fi but it is engaging and interesting. There are a few moral quandaries addressed adding some depth but the stories strength is very much its alien setting and our expectations of what ‘other’ life will be like.