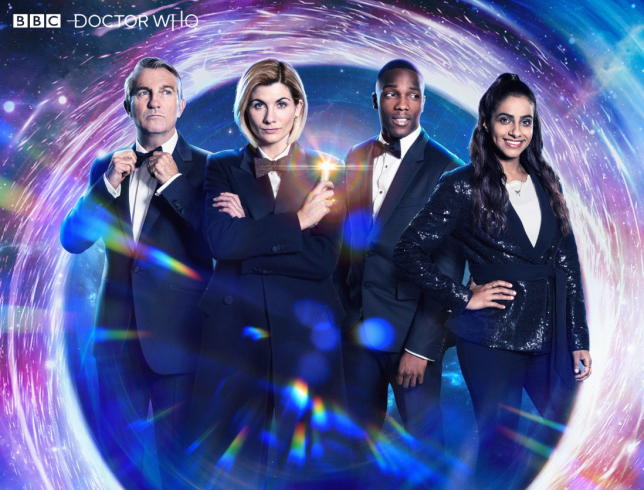 After a years hiatus season 12 of Doctor Who arrived over the New Year. This is quite a year for Who fans as the streaming service – Britbox launched with every episode of classic Dr Who from Hartnell to McCoy.

Jodie Whitaker’s Doctor received mixed reviews during her debut season and it is important for the series future that this season performs well, so does the first episode, a two parter stack up.

Titled Spyfall the theme was based squarely in the James Bond genre with spies across the world being assassinated by aliens. The episode maintained the existing companions and took a moment to show how they were doing following their adventures with the Doctor.

The episodes benefit from good guest characters in the form of Stephen Fry’s Head of MI6 and Lenny Henry’s against typecast villain. Henry in fact does an excellent job in the episodes and is effective as a technology media mogul. It is this aspect that the show comments on the state of modern societies dependence on social media platforms and our reliance on computer tech companies. It is a very heavy handed social comment but gives a clear message about the dangers of handing over permissions to companies.

There are a number of action sequences which always seem a little out of place in modern Who but on the whole the narrative is sound and whilst the aliens don’t quite make sense it is an enjoyable affair.

Jodies portrayal of the Doctor seems more assured now, either due to an improvement in writing or me becoming more used to her. The problem remains the companions, Bradley Walsh is a strong actor and outshines Tosin Cole and Mandeep Gill in nearly every scene. Tosin’s Ryan has greater depth but Mandeep is given very little to work with.

The most interesting and perhaps controversial aspect of the show was the new character introduced – O. I do not want to spoil the reveal about this character but it elevated the episode from the humdrum to the interesting. It provides added plot elements that can be explored during the series.

The episode was enjoyable with all the trademark humour and light touches we have come to expect from the new era of Who but it lacks one thing and that is the x-factor that classic Who had in abundance. In this case I think that Whitaker’s portrayal of the doctor lacks gravitas.

I wait with interest to see how the season progresses.