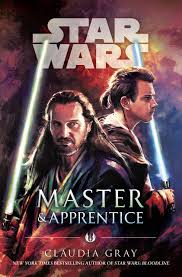 Given the recent output of post Force Awakens novels it is nice to get a book released that is set prior even to the Phantom Menance. The book focuses on the partnership of Jedi Master Qui-gon-jin and his padawan Obi-wan-Kenobi.

The book is written by the very capable Claudia Gray who has produced many Star Wars books in the past and has a way of connecting with the characters. Choosing to focus on the bond between Qui-gon and Obi-wan gives us a fresh look at the master/padawan relationship something we only saw with Obi-wan and Anakin and Anakin with Ashoka, neither partnership of which blossomed into anything good.

The essential plot of the book concerns the planet of Pijal where the regent is an old Jedi friend of Qui-gon’s and the young Princess who is about to ascend and convert the world from Absolute Monarchy to a Constitutional ones life is endangered. Throw in a secret saboteur, the evil slave owning Czerka Corporation and a desperately needed hyperspace lane in the region and you not only get a mystery and action adventure but one packed with politics and philosophy.

It is this philosophy that is perhaps most interesting, we see Obi-wan and Qui-gon coming at the force in different directions and how Qui-gons passion for prophecy learned from his own master, Count Dooku is causing him to re-evaluate himself.

Obi-wan desperately wants to please his master but is torn by the Jedi Council which itself is torn by indecision. You can begin to see the cracks in the great institution that allowed Palpatine to ultimately evade and then destroy them. Even Yoda seems perplexed by it all.

The force hasn’t really been analysed or questioned in the books since the fall of legends and this sort of edges towards the idea forming in the Unifying Force and Luke’s journey for understanding in the Legacy of the Jedi.

Prophecy and the chosen one are mentioned a lot but not really delved into. To me the prophecy was obvious, the chosen one will bring balance to the force. Now if you believe that the dark side and light side are two sides of the same force then Anakin did just that. At the start of the clone wars there were two Sith, Sidious and Maul or Tyrannus and thousands of Jedi, pretty unbalanced wouldn’t you say? At the end of Revenge of the Sith there are still two Sith, the Emperor and Vader and now just two Jedi, Obi-wan and Yoda, pretty balanced now.

What this insight into the force brings to the later saga is less clear and that it is my guess that Luke in the later films along with the ghosts of Jedi past are starting to realise that balance is indeed what is required, too much of either side brings problems, the decadence of the old republic or the tyranny of the empire. What I think will happen in Rise of the Skywalker is that Rey and Kylo will become the two balanced top force users that form a new order that uses both sides in harmony to create a new future. Well thats my prediction.

As for the book. It was an entertaining read. Gray treated established characters well and introducing new ones, especially Pax, a man raised by protocol droids as a boy. She also deftly handled action scenes and kept you guessing about who was and wasn’t a bad guy. The book sets the scene for the opening of the Phantom Menace and gives more depth and understanding to Qui-gon.