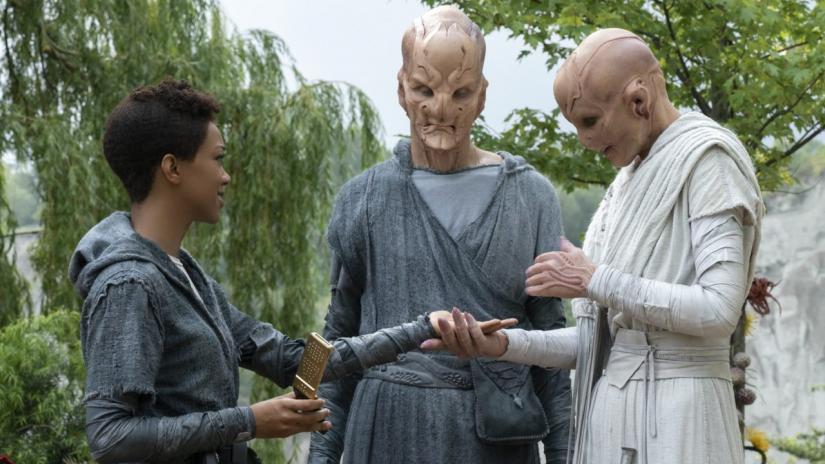 On the face of it this episode should have been top notch. Discovery rarely spends much time planetside nor takes the time o explore the background of alien races. Here we had the chance to delve deeply into Saru’s race and see more of his home planet Kaminar what we got was somehow less than this.

Now don’t get me wrong, this wasn’t a bad episode. It had a solid story that made sense for Saru and the wider plot. The action scenes were good and character development by Culber was much needed. The problems seem to originate in the expression of the Ba’ul. The alien was intriguing but its portrayl was off. The costume was dark and whilst the Kelpiens fitted their planet the Ba’ul didn’t seem to. They had strange appendages and a vey annoying voice and although technologically advanced none of the technology seemed to fit with their demeanour or physiology.

Pike yet again was the outstanding character and Saru obviously had much to do and it was interesting to see his behavioural changes without his ganglia. I almost miss his fear response as much as he does.

Burnhams place on the away team actually made sense this time and the meeting of her and Saru with his sister was touching.

We got a better look at the Red Angel and reference to some kind of suit. Whats the betting that the person inside is a time travelling character that we already know, say Pike or Spock… just putting it out there. All in all this felt like a wasted opportunity to show in greater depth the Ba’ul and their own fear of the Kelpiens, having said this it continues to build the narrative but we need to get some Spock pau off soon or else we risk over extending the plot