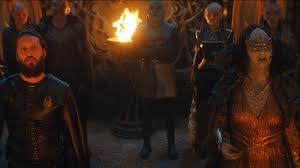 Point of Light, episode 3 of the second season highlights one of the problems of an ongoing plot thread. Every now and again you need an exposition episode to get people in the right places for the following episodes. This is particular so with a series that has a limited number of episodes per season.

What we have here is essential three stories squeezed into one. Each of these in the ‘old’ days would have carried an episode on its own but here we jump from point to point in the same way the camera direction seemed to rely on the twisting zoom at the start of every scene.

Each plot was good and interesting. We had some emotional heft from Amanda and Burnham’s interactions, political intrigue with Tyler/Voq and L’rell and mystery with Tilly.

Amanda’s story line advanced the plot of the Red Angels and started to explore why Spock and Burnham are estranged. It leaves us intrigued and empathetic to Sarek’s wife who realises the damage that has been to to her family.

On Qu’onos we get to see Klingons closer to what we are used to post the Motion Picture. For the impact of Tyler leaving we really needed to see him trying to fit in a bit more perhaps these scenes could have been dotted amongst the previous episodes. This plot was good and gave us a look at Klingon politics as they struggle to come to terms with themselves, to me it fits with the ethos and a warrior race. The fights scenes were not as great as those we often get with Klingons, it was too poorly lit and the direction seemed off. Lucy Liu’s arrival was great and amply sets up her new direction with Section 31 and her own show. My own head canon has the ship as a Starfleet Intelligence vessel, hence it Starfleet style, but this is a cover for Section 31’s more nefarious ideals.

Lastly we have Tilly’s spore problem. Many of us guessed her spored shoulder would have some implication and here we get the pay off. This plot helped lighten the othewise darker plots and as ever Tilly was great, although I do wish both Stammets and Saru questioned the entity more through Tilly before zapping it. My guess is that this parasite will join with Stammets so that he can see Colber again, like Randall and Hopkirk.

The one big downside of this episode other than its structure was the lack of Pike. Anson Mount steals every scene he is in and he was conspicuous in his reduced roll this week… oh and yes the Klingons have hair, good right? Well yes and no. They obviously killed all their stylists as the range of moustaches, mohawks and dreadlocks looked silly.

Not a great episode I am willing to acknowledge that this is a place marker for what is to come and that is something I am interested in.