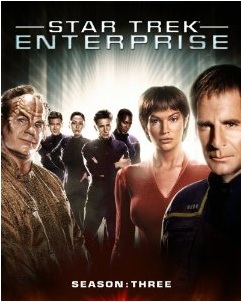 Whilst waiting for the return of Star Trek: Discovery I decided to do a limited re-watch of the last Star Trek series, Enterprise. I was excited by the premise of Enterpise, seeing Earth in a fledgling state following on from First Contact, through the Romulan War and into the founding of the Federation.

Sadly the show as a whole underachieved, seasons 1 and 2 were shaky and failed to gain purchase only reaching the heights of the lowest previous series episodes. On the whole they lacked spark and whilst the crew had a nice dynamic, Travis, Reed and Hoshi were very flat characters with little development. I liked Hoshi, she was very human and relatable and it would have been good to follow her career. Instead the series focused on a triumvirate very much like TOS with Captain Archer, First officer Vulcan, T’Pol and engineer Commander Tucker. Of all the characters however Dr Phlox was my favourite with an interesting species background and some good opportunities to shine.

Season 3 was were things picked up and it was this season that I rewatched. To me, the much loathed Xindi arc gave the series a sense of purpose and direction. It allowed the crew to explore themselves a lot more, how far were they willing to go to save Earth. Whilst many episode had action and this was intensified with the addition of MACO’s to the crew there were still some outstanding non-combat missions.

Exile was an excellent showcase of Sato’s talents. Impulse was a classic haunted ship mystery with Vulcan zombies. North Star whilst silly was interesting and most like a TOS episode. It was followed by Similtude a strong moral episode like TNG and of course the whole Xindi arc was reminiscent of DS9.

The hit to miss ratio increased in favour of more hits and it seemed the series had found its feet. However Season 4 was to be its last, and perhaps strongest with a series of mini arcs with tighter plotting. It was a shame as we never got to see the hinted at Romulan War or the actual founding of the Federation.

Where did it go wrong? To me it was because it had left it too late to show us the future, had the stories of Season 4 been scattered in earlier die hard fans may have been more easily retained. They also needed a more unique take on the trek dynamic, T’Pol was an obvious Seven of Nine clone and as already mentioned the three characters mirrored the Kirk/Spock/McCoy dynamic. The rest of the cast were poorly used and as such we cared little for them. The final insult was the finale. Do not get me wrong I like the episode and I loved that Riker and Troi were back but this was a very unfair ending for a show in its own rights.

On rewatching the series I have realised it was better than I expected, there is greater action and drama than I remembered, but at the moment it still vies with Discovery for my least favourite Trek series.

2 thoughts on “Enterprise – a reappraisal”