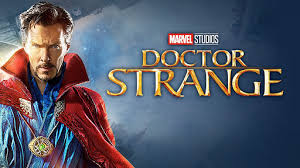 Dr Strange is one of the legion of Marvel films currently out in the world. It has to be said that Marvels domination of the comic book movie genre is somewhat complete. I m not a big comic book fan and find the Marvel films to be entertaining but not always at the top of my watch list. Dr Strange was one of the comic heroes who I knew very little about but I enjoyed his appearance in Infinity War and so took the time to watch his origin story on Netflix.

Dr Strange himself is played by Benedict Cumberbatch. He is an accomplished actor and looks very much like the comic character, the one problem I had difficulty with was his American accent which seemed unusually forced and out of place for him. The supporting cast were impressive, Tilde Swinton made an interesting Old One and I enjoyed her moral stance even if they had gender swapped the role. Chiwetal Ejiofor played an interesting character but his development seemed rushed and I would have preferred less of the Steven Strange build up and more of his training and the change in Ejiofor. Also excellent but underused was Benedict Wong. He has good comic timing and from seeing him in Infinity War I had assumed he had more prominence in Dr Strange.

The special effects in the film where out of this world, although at times, like the Avengers, there was too much happening to follow. The score was good and the plot okay. I never felt we got to connect much with Mikkelson’s villain although the battle of wits between Strange and Dormammu was excellent.

In all the film was a solid slice of entertainment and concept of the magical arts being a superpower is a rich seam to mine and I felt that for an origin story we got too much of the angst of the arrogant surgeon so that his change and revelation seemed too easy. We needed to understand more about the order, its ethos and role before we saw its destruction and eventual rise with Strange in charge of the New York Chapter House.

I look forward to a second instalment of this series as I feel there is plenty of story to explore and is a very different take on the superhero genre.