Star Wars has always outperformed its sci-fi rival when it comes to computer games. I have spent many hours playing X-wing, Tie Fighter, Battlefront and Knights of the Old Republic. Lucasarts built a library of games that covered flight sims, strategy, MMO, first-person shooter and first-person light saber’er but Star Trek has always stumbled despite having a universe as rich and deep. 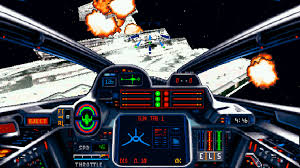 Today I play a lot of Star Trek: Online. It is a very enjoyable MMO which is easy to understand and enables you to live your life as a Captain of your own starship, it is in a way the pinnacle of Star Trek gaming but even so, it lacks something. MMO’s that I have played, SWTOR, Neverwinter,  Elder Scrolls and World of Warcraft all have a deep focus on combat as does STO. This is not surprising, this is an enjoyable playstyle but Star Trek is about much more than this, diplomacy and exploration, ethical dilemmas alongside combat and despite STO’s efforts over the years they yet to have cracked this fundamental element of Star Treks ethos. 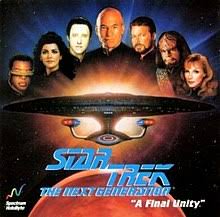 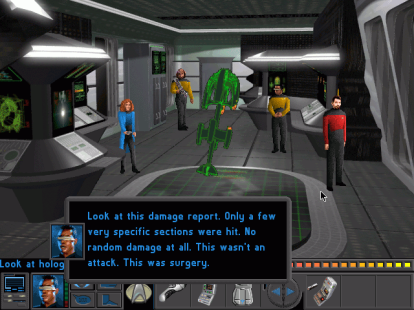 I think the closest we came was with Star Trek: A Final Unity. This enjoyable game was made in 1995 by Spectrum Holobyte. The game itself was set in The Next Generations Seventh Season and featured many of the cast lending their voice acting talents. The plot involved assisting refugee Garidians, part of the Romulan Star Empire in their search for the Fifth Scroll, leading them to the Unity Device and a new race of aliens called the Chodak.

Essentially a point and click adventure the game did include space combat which involved balancing power and controlling weapons. It looks incredibly dated now but the story included all our favourite characters and felt like their first feature film, with searches through star systems, exciting away missions and tense diplomatic standoffs.

I was given a bootleg version of Star Trek: Generations the computer game from Malaysia which was tremendously enjoyable and followed the story and added to it. I particularly enjoyed running around as Troi blasting Romulans and replicating Vinerine to replenish my health. It felt story driven and like you were part of Trek.

The other winning game in my mind was Star Trek: Away Team. This allowed you to select away teams and solve puzzles in a top-down style game which reminded me of the EIDOS game Commandos.

The games Elite Forces 1 and 2 were enjoyable to play but somewhat lacking. They were an attempt at a first-person shooter with NPC Away Team members, the feel was good but the story was poor.

Bridge Commander and the new VR version is immersive and interesting but again is very combat focused. This is not something we can fully escape, combat is at the heart of many computer games and one I am not averse to, I love Assassins Creed and HALO but I want more from my Star Trek and I think there is a solution.

That solution is Bioware or a company like it. Bioware has long been, to me, the industry leader for interesting, rich universe building, character interaction and dynamic storytelling. They were responsible for the groundbreakingStar Wars: Knights of the Old Republic and more recently the Mass Effect and DragonAge franchises.

These games gave us character-driven puzzle solving quasi-first-person adventures in new worlds. Imagine if Bioware were given the Star Trek licence. The universe is already present so their development time could be focused more on the story and logistics. Imagine an away team selection process of a crew with unique skills, puzzles both combative and peaceful and a mission by mission story that builds to an epic finale with real choices that play into the narrative. You can gain points for following Starfleet codes akin to the paragon/renegade system and have a skills tree that improves your captaincy as you progress.

Whilst Trek seems to be expanding its horizons with new series and new seasons perhaps its time to venture back into the computer game market and give us the well-balanced game that would be a proud successor of Star Trek: A Final Unity.