Netflix is churning out an amazing amount of films that bridge the gap between hard sci-fi, lo-sci-fi and drama. Not all have the gravitas of what many would consider ‘proper’ movies but they are certainly improving. This July 2018 offering – How It Ends, is an interesting disaster film with a strong cast. It is directed by David M. Rosenthal and written by Brooks McClaren. 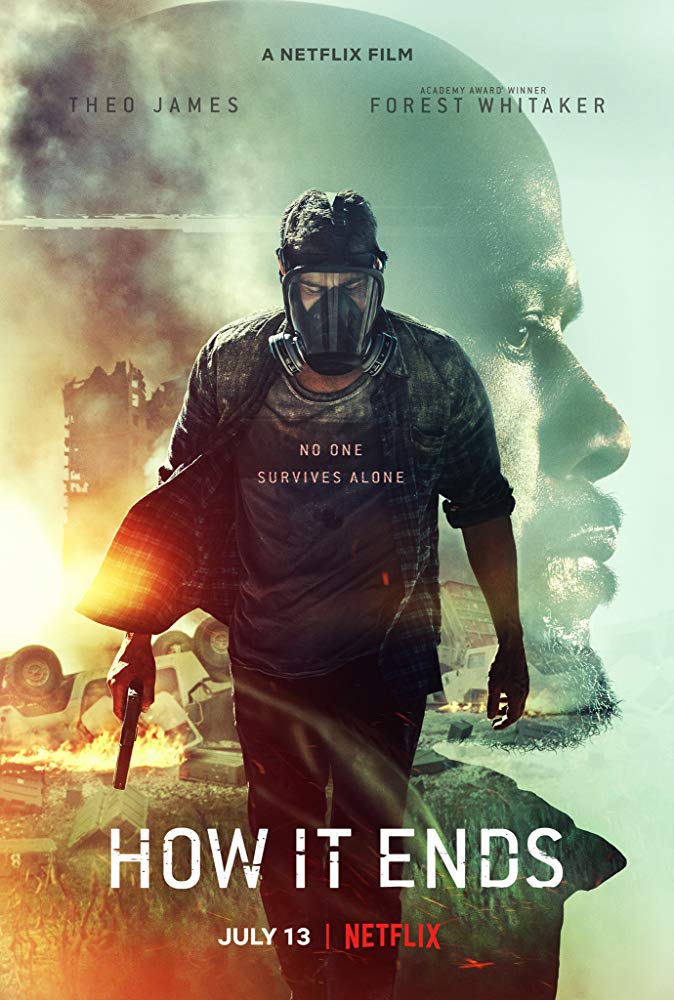 The film is essentially a two-hander between ‘Divergent’s’ Theo James and ‘Rogue One’s’ Forest Whitaker. What appears to be an unlikely pairing works incredibly well. Forest is a well known and powerful actor whilst Theo is somewhat underrated and poorly utilised.

The film revolves around James character, Will Younger, trying to drive from Chicago to Seattle to find his pregnant fiance when some kind of catastrophe strikes the United States. He is accompanied or rather led by his fiance’s father, Forest’s, Tom Sutherland. On the way, they struggle to survive the collapse of American society and explore the darker side of humanity.

The film is essentially a thriller road trip movie with a disaster movie backdrop. The cause of ‘The Event’ is never fully explained and whilst at the start of the film you suspected perhaps alien invasion or something akin to this you slowly realise that this is a natural disaster of epic proportions.  This, as a sci-fi fan, might seem to disappoint me but in fact, I think an alien explanation would have ruined the film. This film wasn’t at all about ‘The Event’ but about people and what people do in extremis.

The film follows the unlikely couple, Father in Law to be and his Son in law over 6 days. Their relationship is a strained one with Forest’s ex-marine looking down on Theo’s sophisticated lawyer type. Forest is capable and savvy, aware of what a fallen society might look like and Theo is naive and innocent, barely able to comprehend how the situation has changed.

Slowly as the film evolves and Theo is exposed to more and more of societies collapse, and as Forest becomes more and more debilitated from broken ribs Theo is driven to take on a greater mantle of responsibility and slowly develops into a more suspicious character as evidenced by the end five minutes of the film. The addition of the mechanic, Grace Doves, Rikki was a nice way to allow the viewer to see how an outsider viewed the pair, although not altogether necessary and whilst the character wasn’t entirely likeable her departure after the realisation that her actions had led to someone’s death gave us a moment to explore how far we would go in similar circumstances.

The premise of the disaster has resulted in a nationwide power cut which, unrealistically, promotes a descent into inhumanity in the Amerian population. This is the films biggest weakness. In less than a day people are robbing each other and killing for whatever they can get, in reality of National Guard and police forces would be able to maintain more control and I don’t think society would collapse that quickly but the filmmaker needed this to keep up the tempo of the film and drive the narrative. Likewise, the lack of people seen whilst not realistic in a country with a population of 325.7 million added to the spookiness and tension of the film and the possible future after man. There were glimmers of hope amidst the darkness presented by Rosenthal and Brooks. There is the small town where the Sheriff had organised some protection for his people and the family that pick up Theo whilst hitchhiking, this serves to indicate that there are good people out there although they do seem to be in the minority.

The loss of Forest’s character from wounds sustained preluded by the sappy coming together of the two protagonists with  Theos character promising to look after the man’s daughter was a tad cliched but necessary, the ending would not have worked if Forest survived. We needed to see Theo’s character come into his own and be someone capable of protecting his fiance. There are plot holes and the film scores poorly with critics. When did Theo’s character learn to drive like that and the aforementioned rapid collapse of order but overall the film was engaging and Theo James was an engaging hero. The story has character led and the disaster which was barely seen or referenced was never the point, just the vehicle to tell the story, although the devastated Seattle was spectacular.

I will end this review with the end of the movie. The final scenes show Will now reunited with his fiance Samantha, rescued from a conspiracy nut trying to outrun a massive pyroclastic flow emanating from an apocalyptic eruption. The camera tracks the jeep as it hurtles down the road with the roiling, boiling ash cloud in pursuit. Of course, the car breaks free and they drive off north to the safety of Canada. Given the dark tone of the film and the comment of the descent of society I can’t help feeling the film would have been better if a) following Will telling Samantha he loves her and the baby and that he will protect her that this futile gesture against nature is highlighted with the car being enveloped and the struggle all being for nought or b) that the camera lifts and pans back at the last minute to obscure the car leaving the viewer unsure whether they survive or not.